Established in 2016, Super73 has grown from a crowd funding campaign into a legitimate eBike brand. Carbage gets ahold of a Z1 for a test ride and new project.

I’m not one to shy away from electric vehicle topics and I will always feel that they are our motoring future. However, I have never owned one, even a hybrid vehicle. Well, that changed just a few days ago when I made the purchase on a brand new Super73 Z1. Here are my thoughts after about six days of ownership and 60-miles of riding.

I was able to get this bike at a discount thanks to knowing someone over at Super73. While I did not pay full price, this was still a purchase by me and the discount I was given was not in exchange for this review. 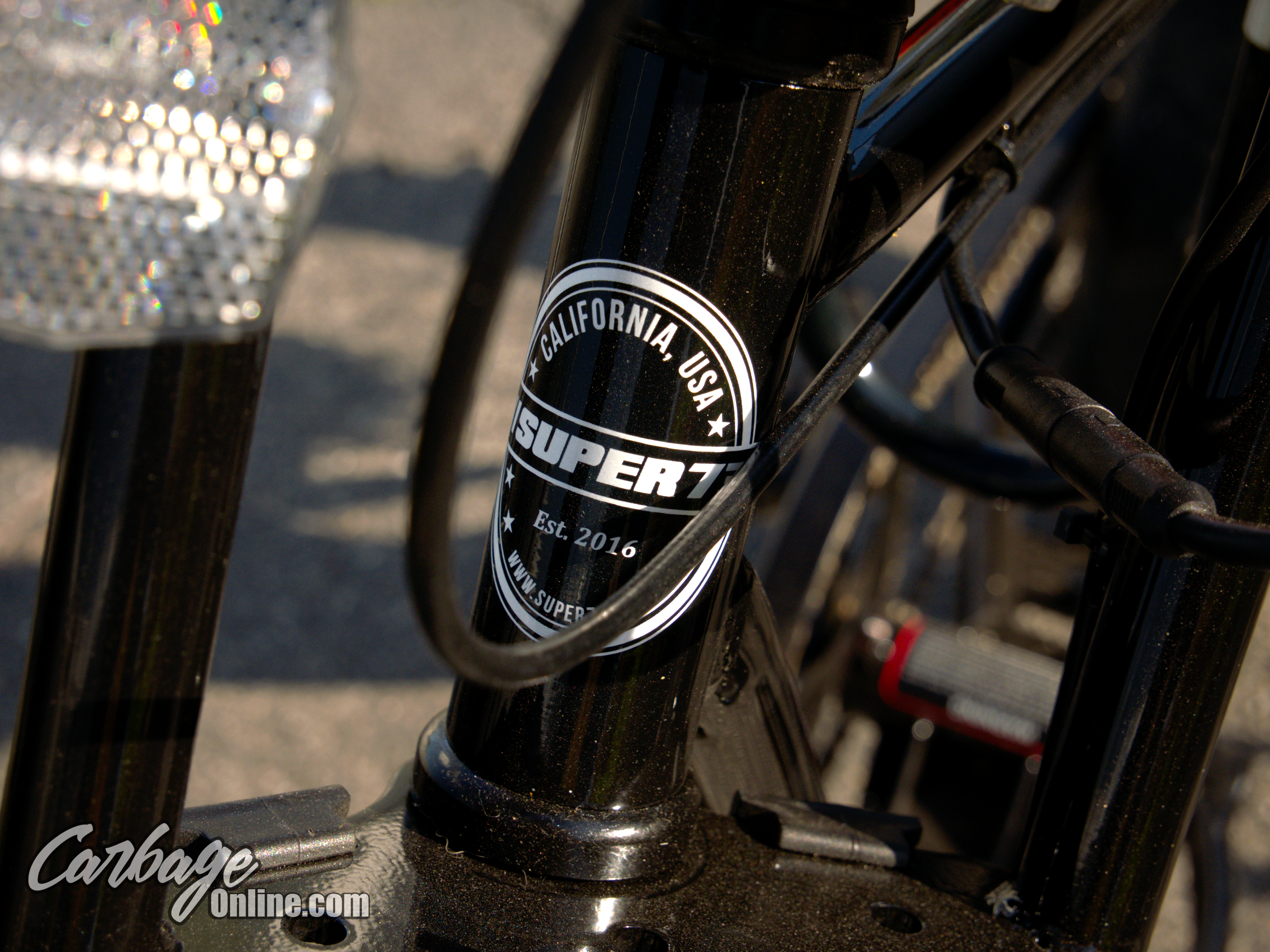 Lithium Cycles was established in 2016 by Aaron Wong, Alix Armour, and Michael Cannavo with the announcement of the original Super 73 Kickstarter. That original bike was a powered by a 1000-watt mid-drive motor and inspired by motorcycles built in the early 1970s (thus the inspiration of the “73” in Super 73). With nearly 300 backers donating a total of $441,461 (above and beyond their $25,000 goal), the original Super 73 was a success.

From that original, Lithium Cycles changed into the Super73 brand and is nearly ready to launch several new models in June 2020. These new bikes are evolutions of the original Super 73 with the transition from a mid-drive to a more efficient rear hub motor. Despite that, the DNA of that first bike is seen in the new S-series and the Z1 that I have today. 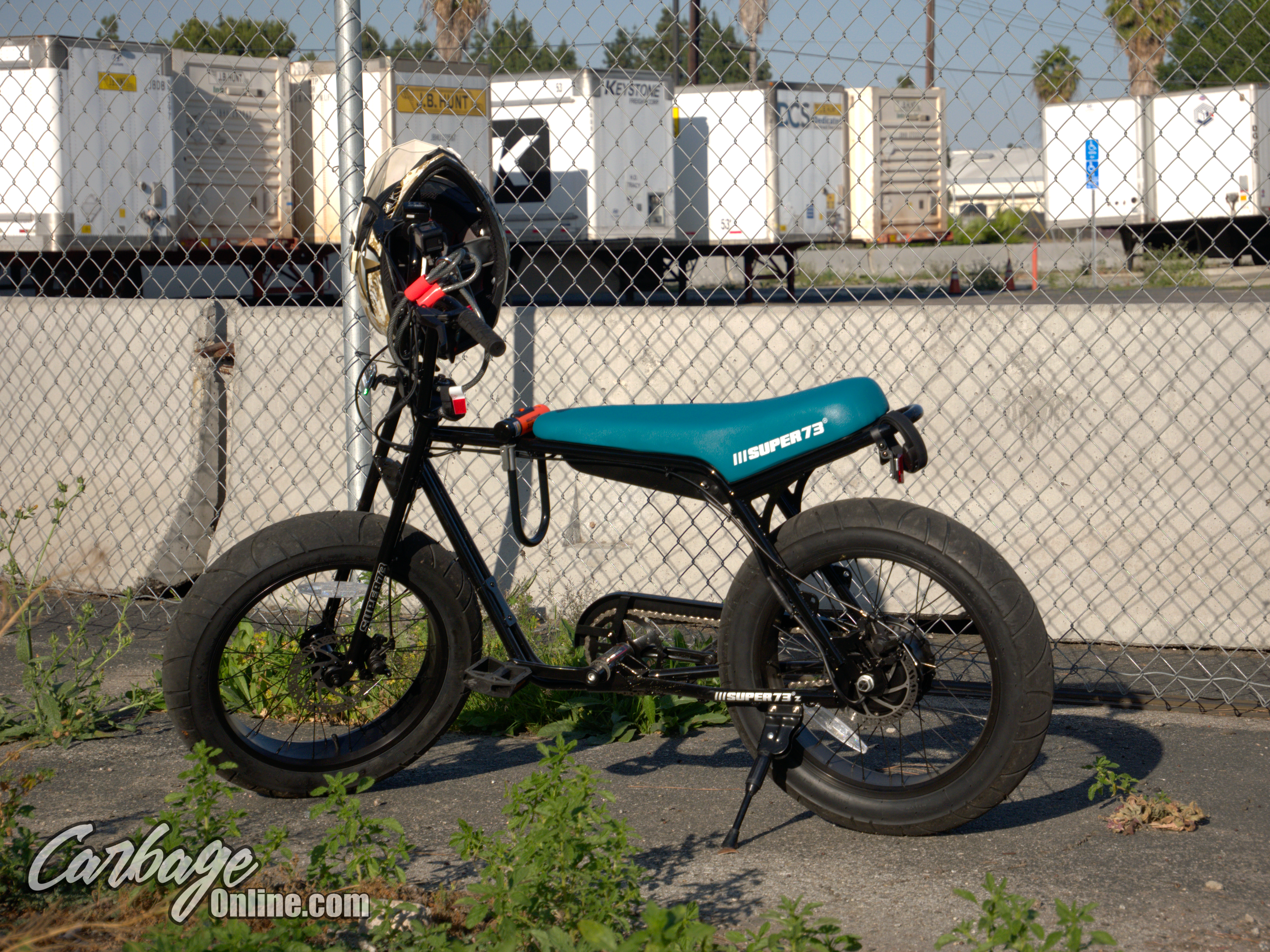 The Z1 is billed as the entry level bike at $1395 MSRP from Super73 (which they offer financing for, too). It is certainly a gateway into ebike ownership thanks to its motocross inspired banana seat and aggressive looking frame. Rather than use the 1000-watt hub motor, the Z1 is powered by a less powerful 500-watt motor that allows the bike to be classified as a Class 2 ebike with speeds that never exceed 20 MPH. Any faster and you’d begin to need a motorcycle license to operate it. It’s that lack of licensing that Super73 sells on as you get good speed and the feel of a motorcycle without the less attractive looks of most ebikes that are based off of mountain bikes or kick scooters. 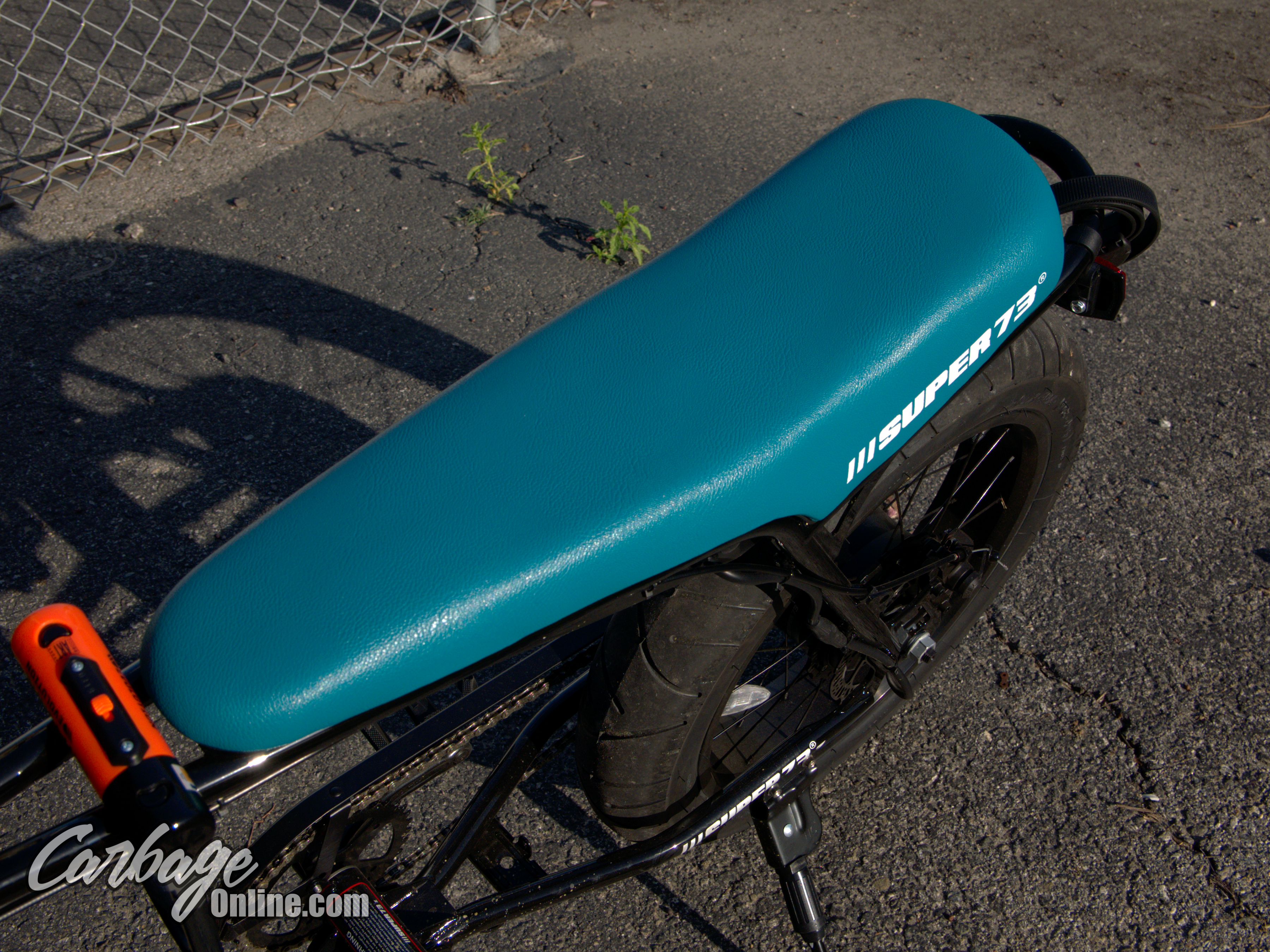 It also comes with their smallest capacity battery built into the seat: an 11.6 amp-hour (ah or 418 watt-hour), 36-volt battery made of Panasonic 18650 cells. At full charge and a 275-lb rider, the bike will go 20-miles without the need for peddling except from dead stops. The only downside is that the charger is limited to two-amps and takes six to seven hours to fully charge the bike from a drained battery. If you don’t fully use up the battery, you can charge in less time, so your average charge time will very from use to use. Also, the more you pedal, the less battery power you use. 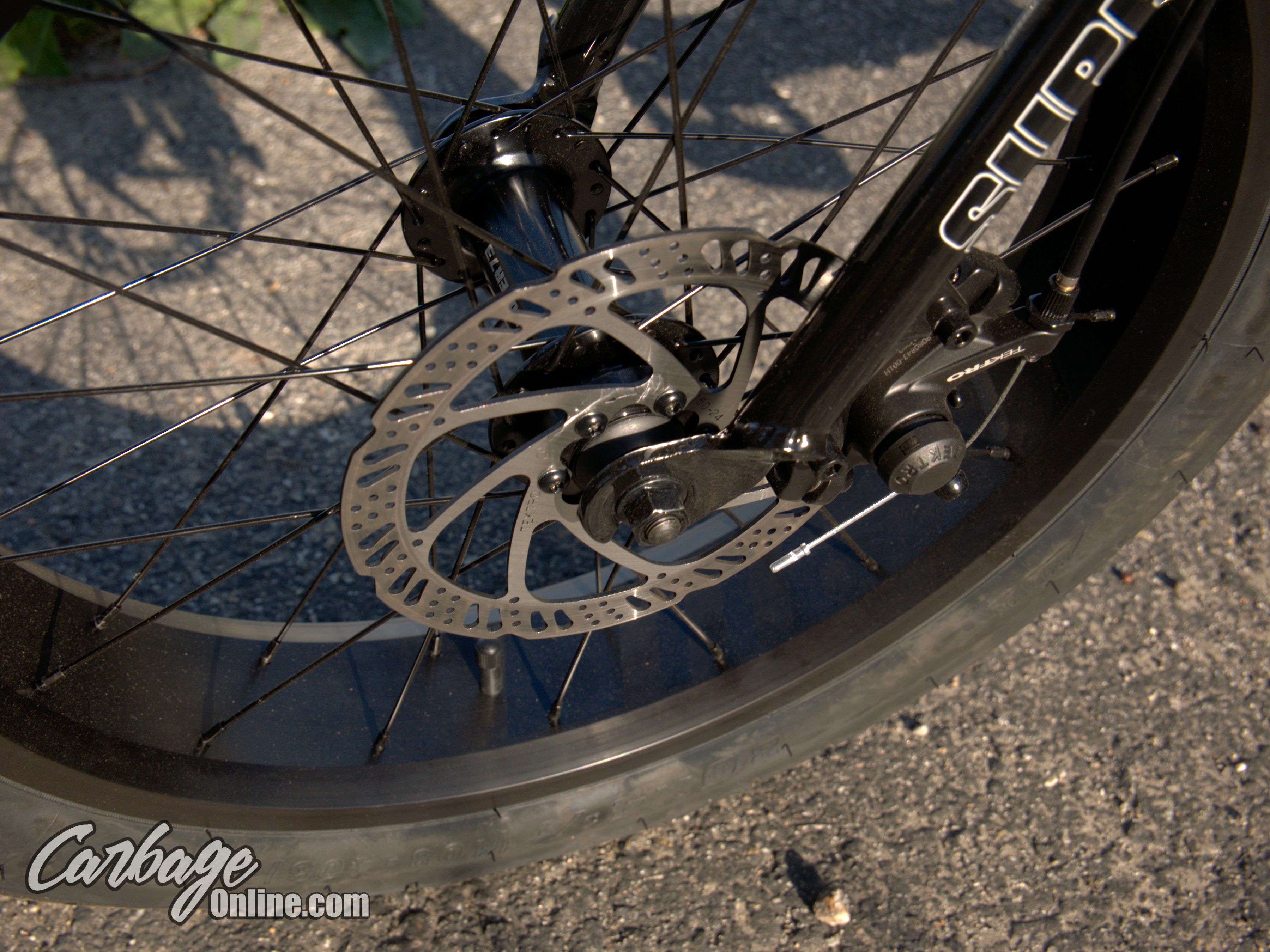 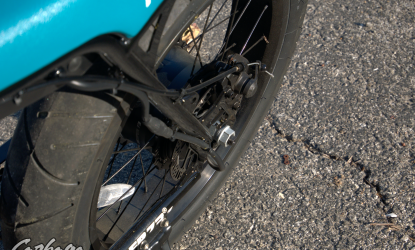 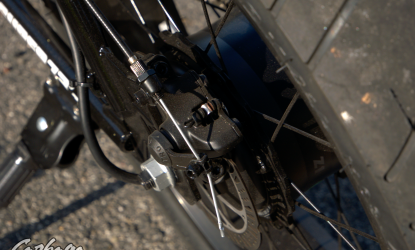 Super73 Z1 Test Ride 7
The Z1 is equipped with a set of mechanical disc brakes and it works just like a hydraulic caliper in that a piston pushes the brake pads into the rotors, but that’s where the similarities end. If you’ve ever used your handbrake to stop your car or SUV, it has a similar feel. It’s not super firm as you feel the cable stretch as the pads bed in, but it is consistent. It will also require regular adjustment to compensate for the wear of the brake pads. 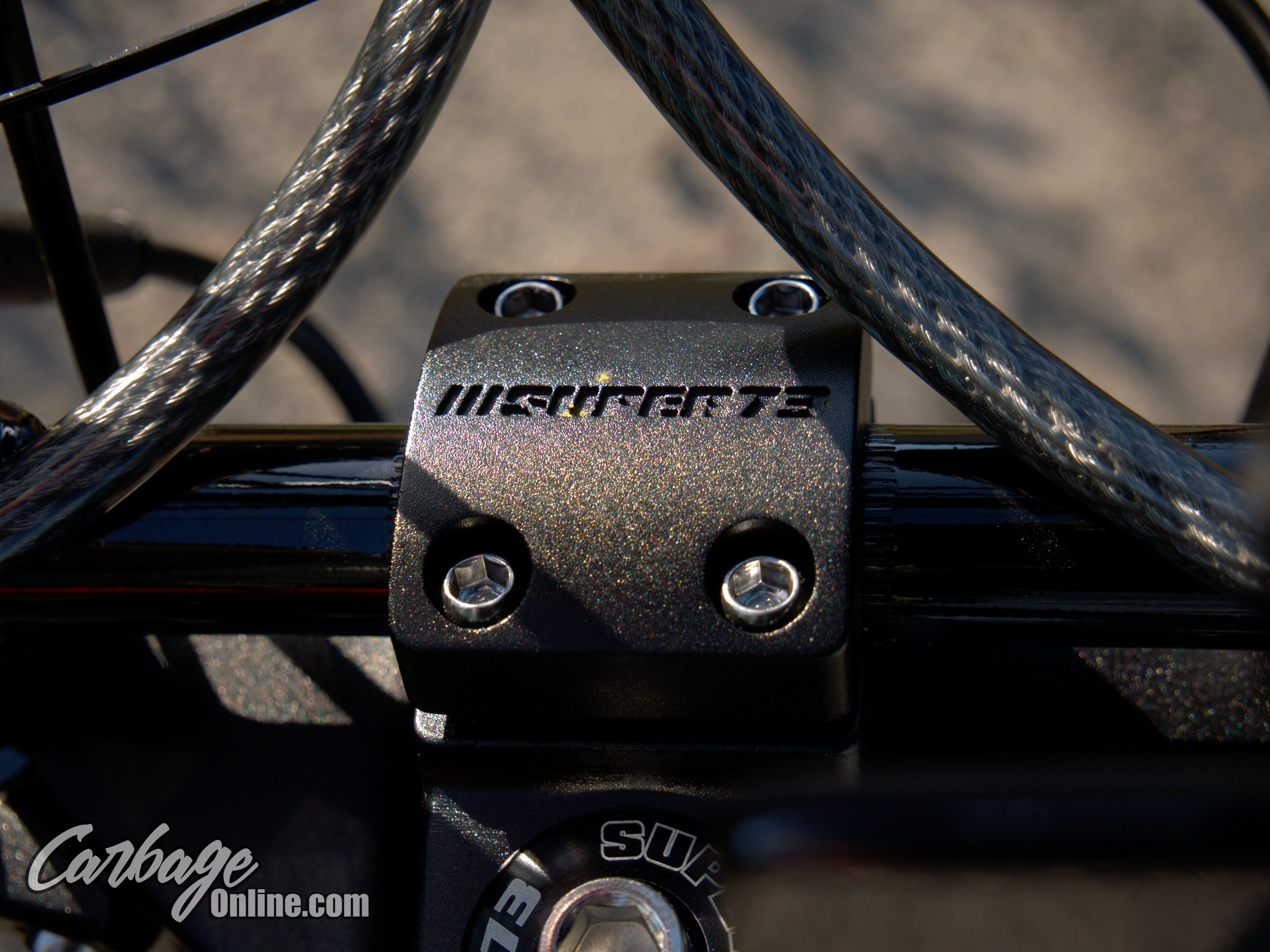 The triple tree of the Z1 does feature an adjustable handlebar setup but there is no suspension in the forks nor in the rear. This is a solid frame and forked bike and you will feel every bump and crack in the road or sidewalk if you choose to ride it there. This isn’t necessarily a bad thing even up to the speeds it is restricted to, just something to know if you’ve never ridden something like this before (like if you’re coming from a mountain bike with full suspension or even a set of suspension forks). 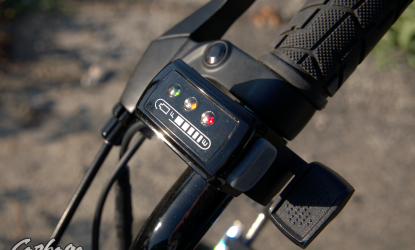 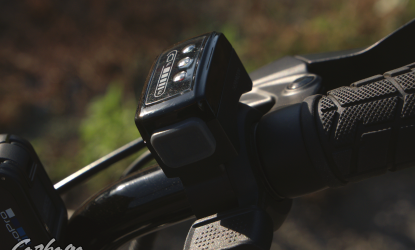 Super73 Z1 Test Ride 4
The throttle is done by a thumb throttle, like ATVs and many other ebikes. So, if you’re used to pit bikes or even full-size motorcycles, it’s not a hard thing to get used to. It won’t feel like it due to the low power of the motor, but the throttle is linear and responds to partial inputs. You don’t need to be full throttle to ride the bike and you have full modulation of your speed until 20-MPH. 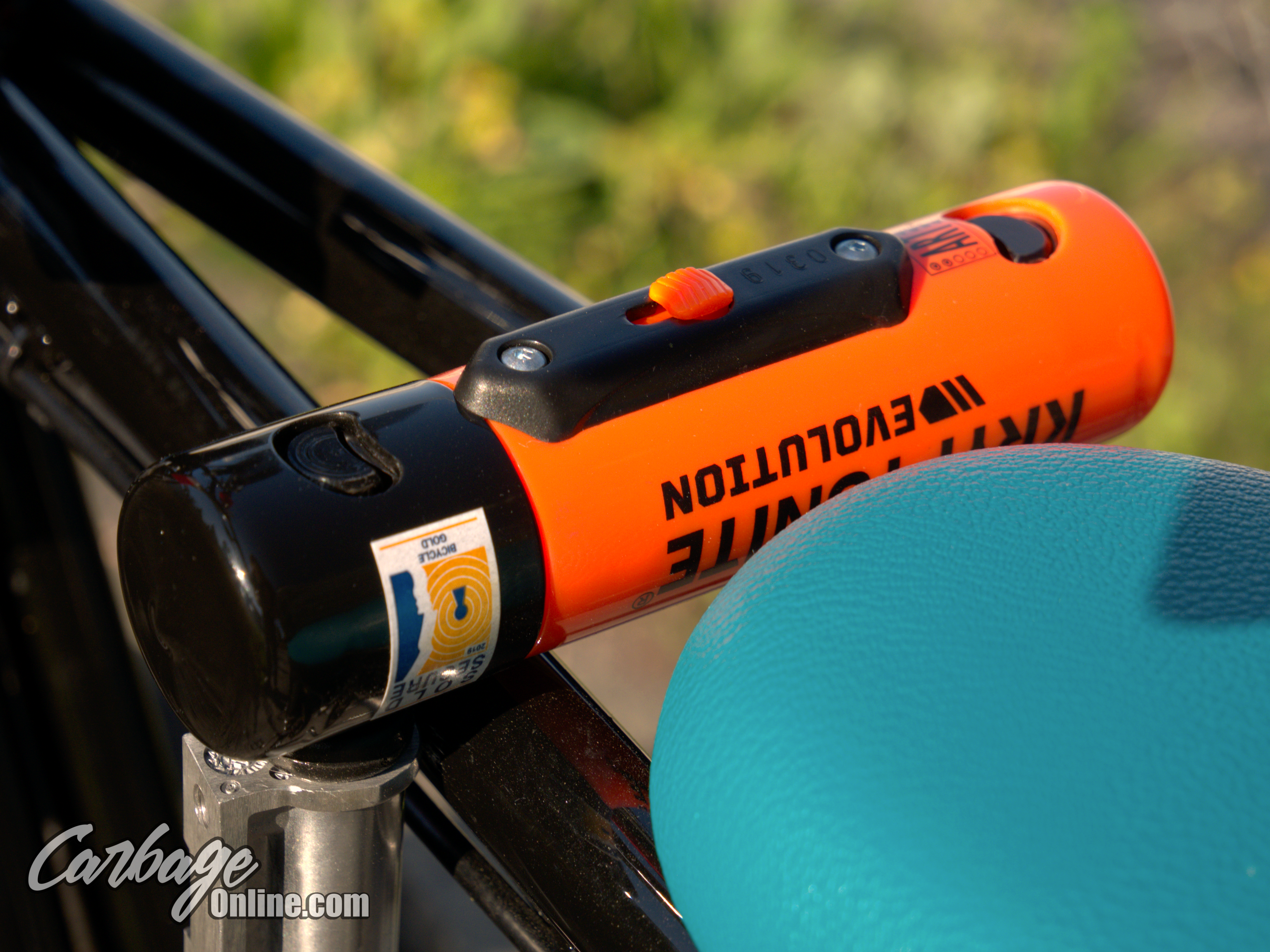 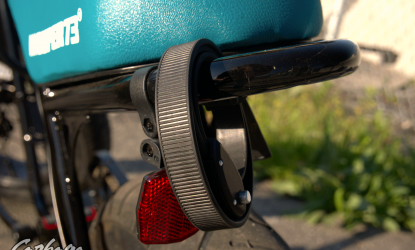 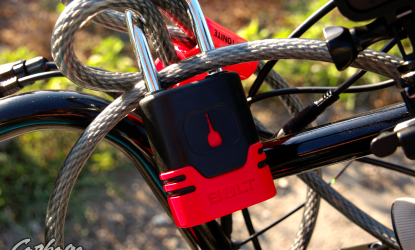 Super73 Z1 Test Ride 13
The bike doesn’t have a key as it’s just a push of the button to turn the bike on for electric riding, so you’ll need to provide your own security measures to protect your Z1. I opted to purchase a Kryptonite Evolution Mini 7 13mm U-lock with their 10mm steel looped cable. I also purchased an Ottolock steel and Kevlar bike lock. BOLT provided me with a two-inch padlock that is designed to work with my Nissan Pathfinder key. I have a separate video review on that lock coming soon as it’s an interesting security device that allows you to use your vehicle’s key. 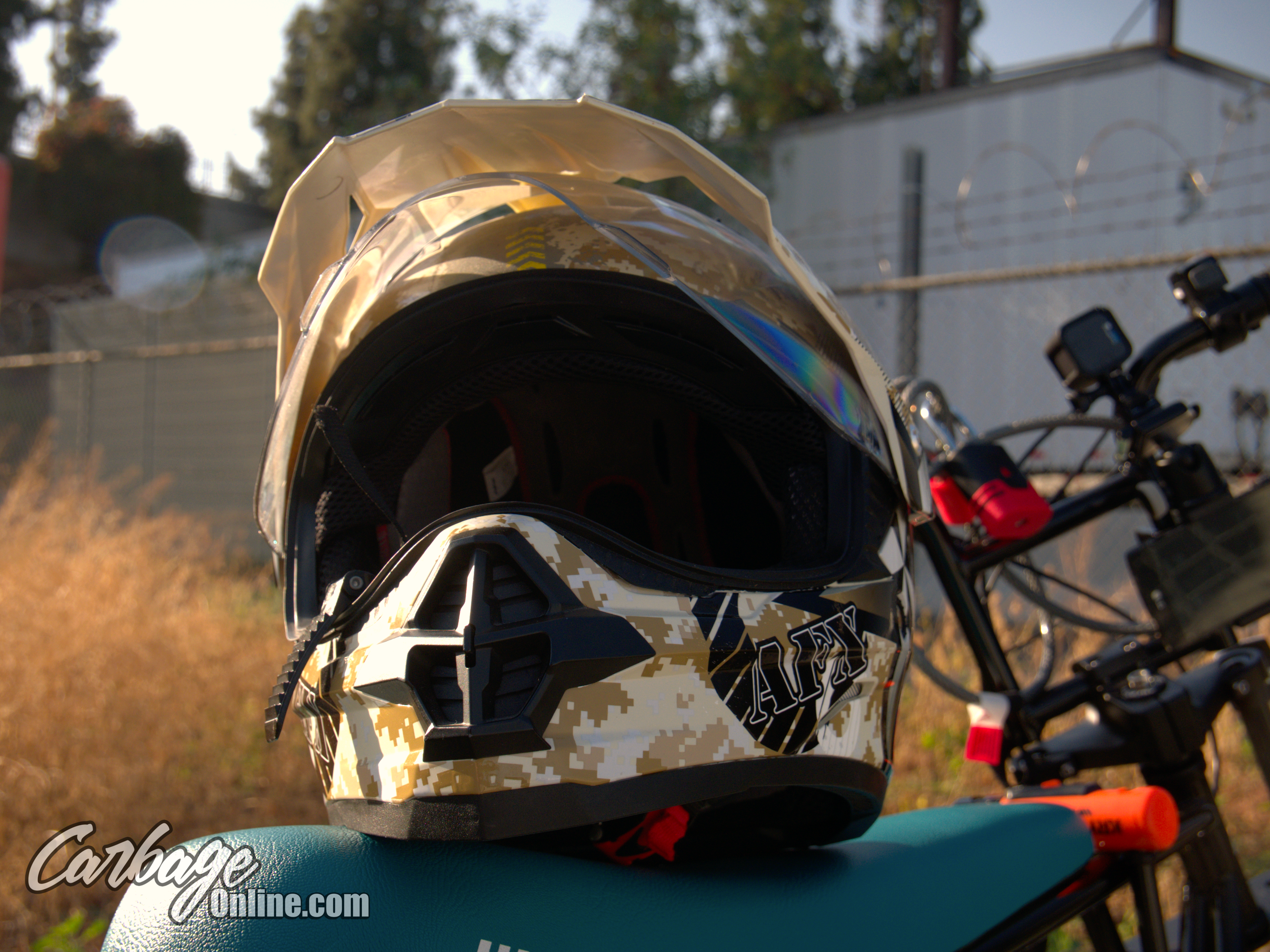 For my own protection, I use an AFX FX-39 in Marpat Camo. It’s been a great helmet for me as I have owned it for several years and it’s as comfortable to me as the first day I bought it. I also like the motocross looks it provides as well as having a large opening with the face shield up to allow air in during hot weather. It’s not too heavy and is certified ECE 22.05, which was a stricter rating than the DOT FMVSS-218 for motorcycle helmets (I believe that is still the case, too). The updated version of this is the FX-41, which I may buy at some point later. 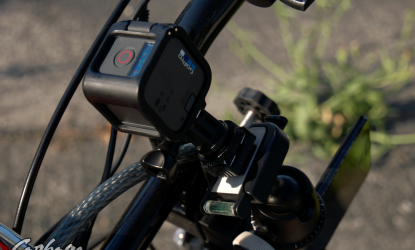 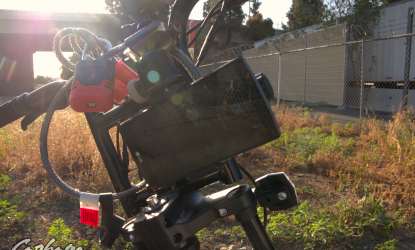 Super73 Z1 Test Ride 12
To capture riding footage for now with my GoPro Hero5 Session, I’m using this clamp-on mount that holds on to the handlebars. I also use a cellphone mount that has an additional 1/4-inch x 20 tpi thread along with the matching grub screw so I can have an external viewfinder for the Session. I have a pair of new clamps coming in the mail so I can mount the Session on the handlebars and my Yi 4K camera on the rear frame. Other than a pair of gloves, my camera backpack, and a pair of form-fitting sunglasses, that’s all the extra equipment I use that didn’t come with the Z1. 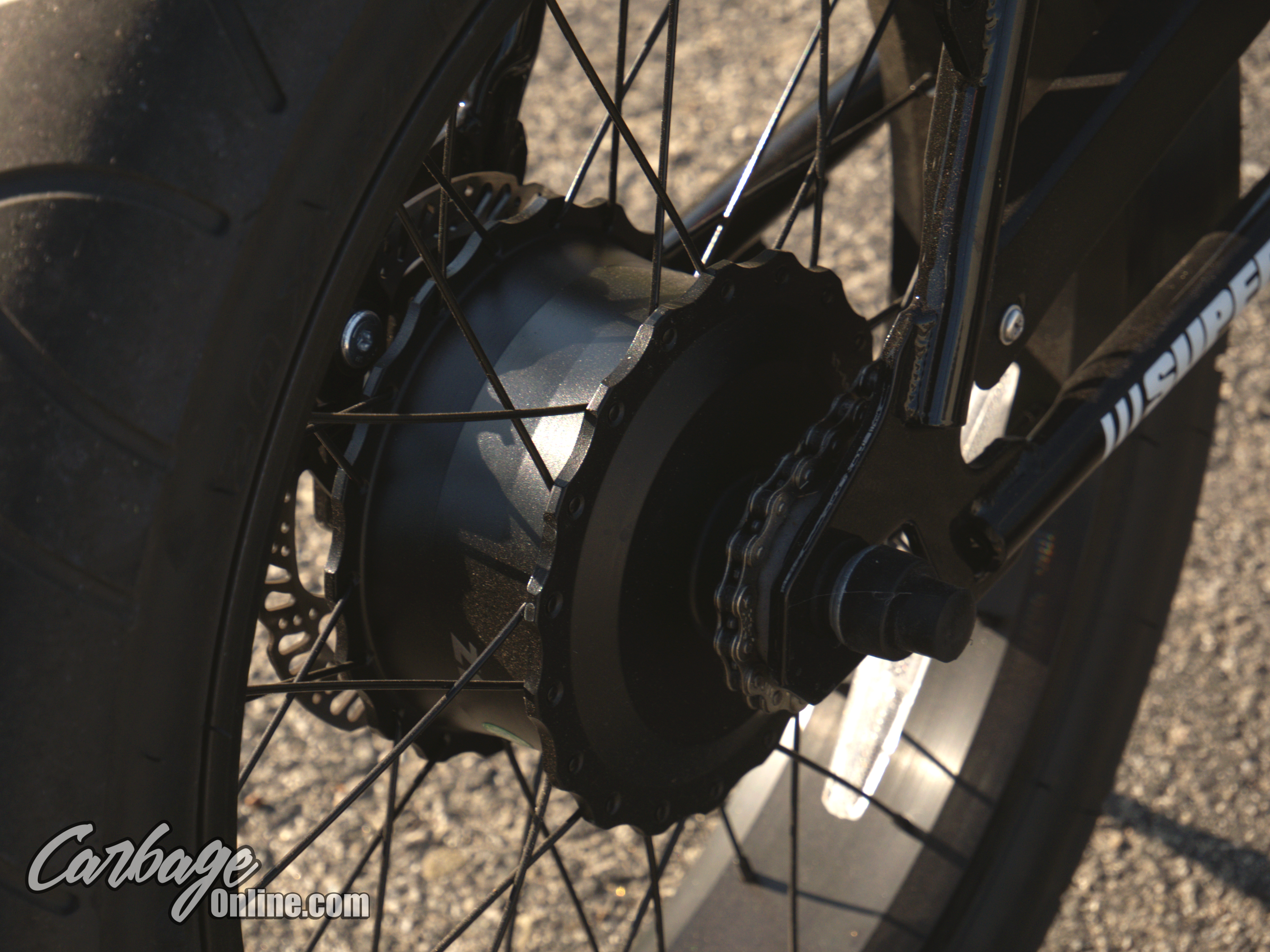 I’ll be honest, I hadn’t ridden a bicycle, scooter, or motorcycle in years. Even the last bike I rode was a junk Walmart-sourced mountain bike that had a horrible gear ratio in its highest gear. It was a chore to ride and the cheaply made materials meant that it broke on me after a week of regular use. I didn’t expect myself to ride a pedal-driven bike again.

To say that experience and my ride with the Super73 is night and day would be disingenuous comparison to the Z1. Even as a fixed-gear bike, the Z1 is easy to pedal and gets up to speed quickly. Adding in some “boost” from the hub motor as you pedal is even more gratifying. If you want a fast takeoff from a stop, you must pedal first or pedal while holding the throttle open. A dead stop on the hub motor only takes some time and will drain the battery quickly, reducing your mileage as you use up the capacity.

Once up to speed, the Z1 is stable and will limit itself to 20 MPH. The stock motor controller limits it and you hear the difference as it gets up to that restriction. The only time I felt any speed wobble was when I needed to stand to get over a set of railroad tracks, but I believe that was user induced and not from the bike or its 20-inchx4-inch fat tires.

Now, when I purchased the Z1, I knew I was going to enjoy it. I’ve had an interest in ebikes for a while now and was originally going to build one. After reading and looking at the Z1, I pulled the trigger knowing I was getting something better than what I could create from scrap parts. What I didn’t expect was how much fun riding this bike is. Even at its slow 20-MPH speed limit, you still get a rush riding the Z1. I’ve put nearly 60-miles on it just in recreational riding and every time I tell my roommates how I love riding it. If you’re thinking about pulling the trigger, I’d encourage you to purchase it. I don’t think you’ll regret it so long as you keep its speed limit and fixed frame in mind.

Well, this Z1 isn’t staying stock for long. Let’s just say I’ve got a pile of parts that is growing, and you’ll have to keep up with this bike. What I have in mind is something I’ve been dreaming of when I first moved here to California and worked at Drowsports. This is an idea that’s been eight-years in the making and takes influence from a certain segment closely tied to the American Motorcycle Association, Harley-Davidson, and Triumph.

I love doing these videos and it seems you guys always want more. If you want to support the channel and site, you can do so on Sponsus and Patreon. We also have swag you can buy at Carbage: The Store as well purchasing photos on the Carbage Pixles Shop. I’ve also added Amazon Affiliate linking and ads and both direct up to 10% of sales off the site back to me so long as you buy from them.