Speed Shiftin’ – What is the Dual Clutch Transmission?

It’s replacing more and more traditional manual transmissions, but what exactly is the Dual Clutch Transmission in the new C8 Corvette and Shelby GT500?

The Dual Clutch Transmission, shortened to DCT, is the latest craze of auto manufacturers that don’t opt for the Continuously Variable Transmission (CVT) and want to give owners the option to be able to shift their own gears. It has many names such as the Direct-Shift Gearbox (DSG) from Volkswagen, Porsche Dopelkupplungsgetriebe (PDK), Ford PowerShift, FCA’s Twin Clutch Transmission (TCT), AMG SpeedShift, and many others. However, they are all the just brandings of the same thing and are often made by the same suppling manufacturers if they are not built by the automotive manufacturers themselves.

The main supplying manufacturers are BorgWarner with their DualTronic that VW and Nissan uses; Getrag that makes the DCTs for BMW, Ferrari, Renault, Ford, Mercedes Benz, Volvo, Smart, and Mitsubishi; Graziano for McLaren; LuK Clutch System’s Parallel Shift Gearbox and XSG branded as the DQ200 from VW; Ricardo which is used in the Bugatti Veyron; ZF with Porsche’s PDK; and finally Termec and its TR-9070 DCT in the Ford Shelby GT500 and a new transaxle in the 2020 Corvette C8. 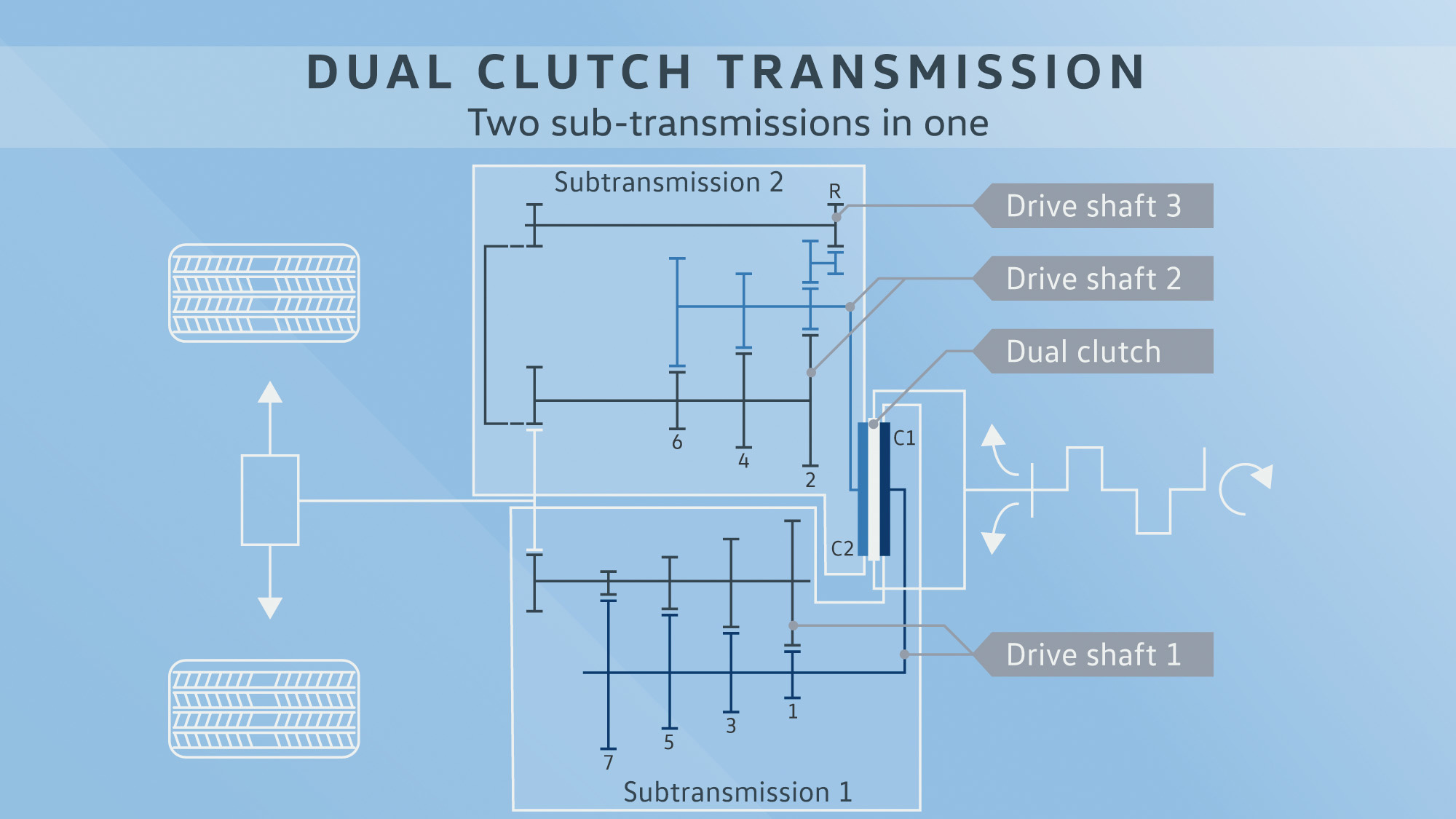 Either used as a transaxle (like the C8), Rear-Wheel Drive or a Front-Wheel Drive transmission, most DCTs work the same. A pair of clutches attach to the flywheel by a housing that looks nearly like a torque converter and wet the clutches with transmission fluid. A concentric input shaft is attached to each clutch where the one clutch rotates the outer shaft and the other clutch rotates the inner. These concentric shafts rotate the gear, one shaft does 1, 3, 5, and other odd-numbered gears while the other shaft does 2, 4, 6, and other even-numbered gears.

From here, it is like a standard manual gearbox with shift forks engaging synchros on each gear. Two gears are always selected at the same time, but power from the engine is only sent to the engaged clutch and input shaft it is attached to. So, when you are in first gear, second gear is also selected but idle until the clutch for even gears is engaged. 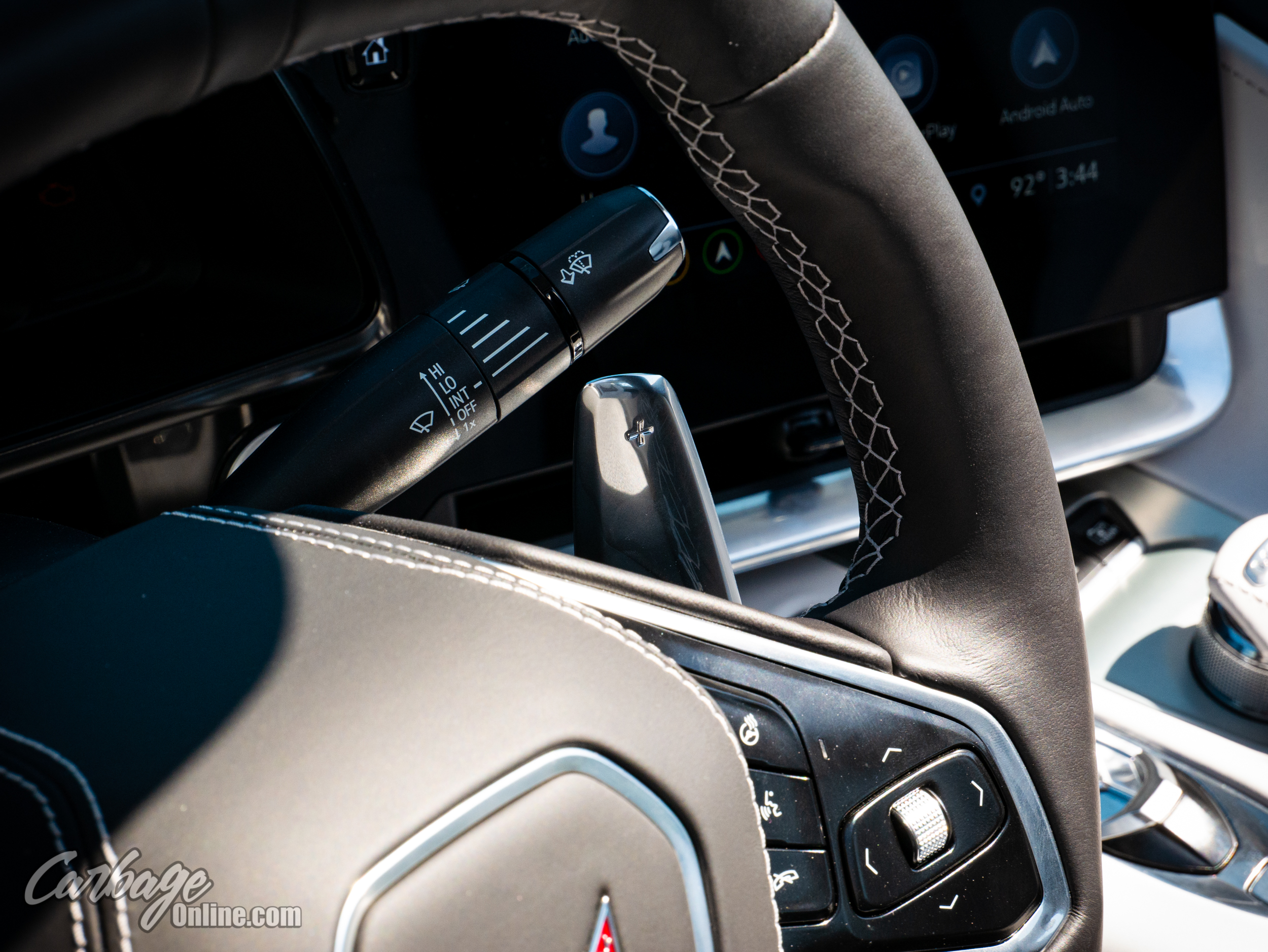 When you pull on the gear selector – which can be a paddle, shifter, or simply a button – or the computer tells the transmission control unit (TCU) to shift in to second gear, the clutch for even gears is engaged and odd gears disengaged. Finally, the next gear shift fork is engaged into the next gear but, again, idle until the odd clutch is engaged. Continue to process as you go up each gear.

Downshifts have a pause as it tells the shift fork of the lower gear to engage, but most TCUs tell the Powertrain Control Module (PCM) to rev the engine to match speed, better known as automatic rev-matching, and make the shift seem seamless. The computer can further predict this by detecting deceleration of the vehicle and when the driver uses the brakes. Well, in most cases. We will touch on that in a moment. 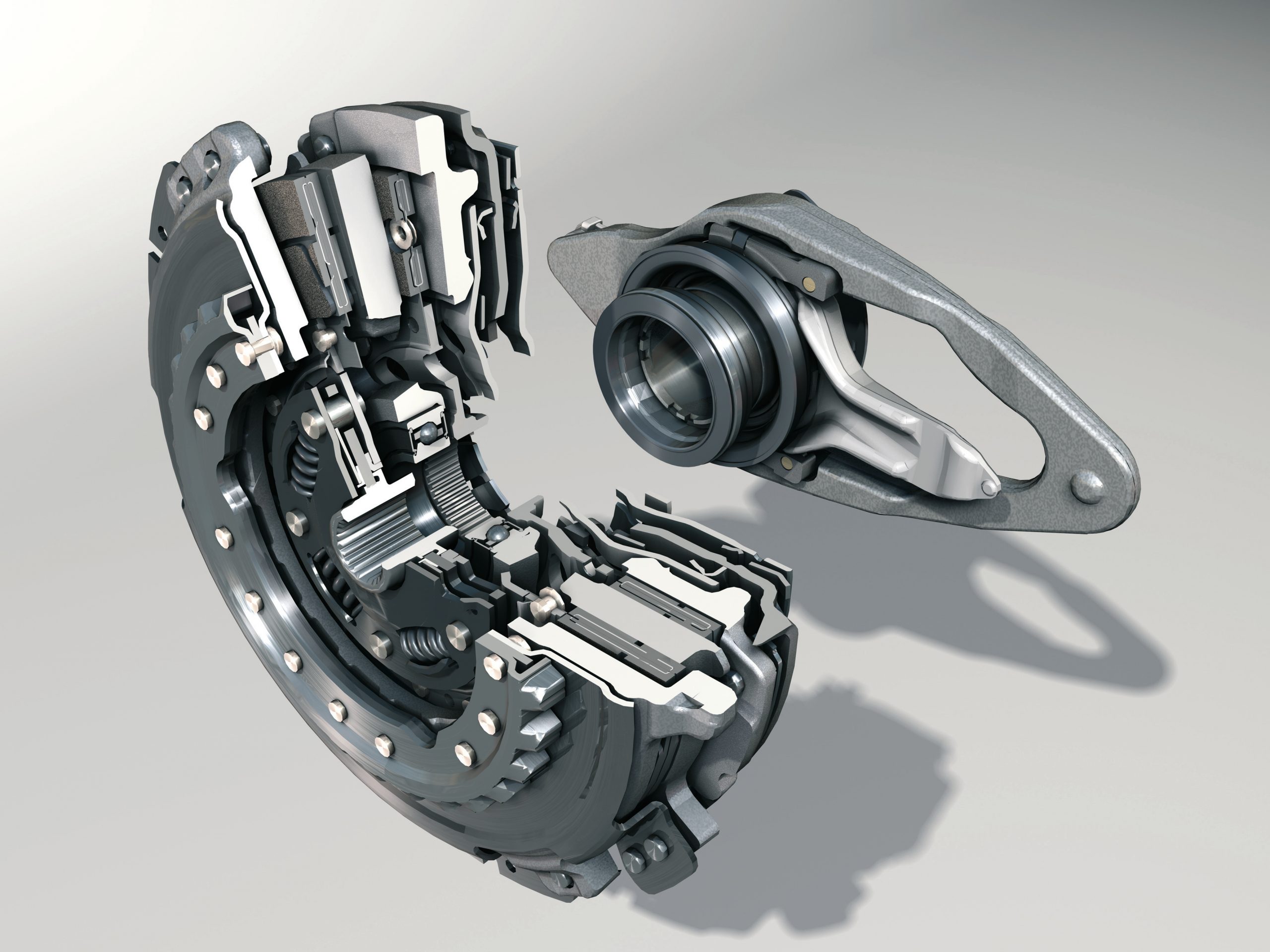 The Kia/Hyundai DCT uses a pair of dry clutches as well, but the clutch package and engagement is more reminiscent to a standard clutch. It features a clutch fork, clutch actuator that looks a lot like a standard slave cylinder stacked together, and a clutch bearing for each clutch. You would think it was a standard dual clutch like you see in performance cars, but it also features a concentric clutch shaft and dual gear shafts. It is worth an article by itself just on how it works. However, the principal is the same as with all DCTs.

The Ease of the Automatic

Most all auto manufacturers give the owner the option to use the DCT in an automatic mode. It does not suddenly morph into a planetary transmission like we are accustom to in traditional automatics, though. Ok, that is obvious as that would be a great magic trick.

However, you do not need to tell the car to shift when it is in this mode. You do not even have a clutch pedal to worry with, even in manual mode. It is all done by the TCU. All you do is control the gas, brake pedal, and steer the car, just like an automatic. It even acts kind of like an auto as it will stay still when you release the brake and shift a gear too high until you mat the gas pedal and hit “passing gear.” This does change when you press the button or move the shifter into manual mode. From here, it holds the gear you want, will creep forward when you release the brake, and shifting (both up and down) is faster than you’re able to do in an H-pattern box. 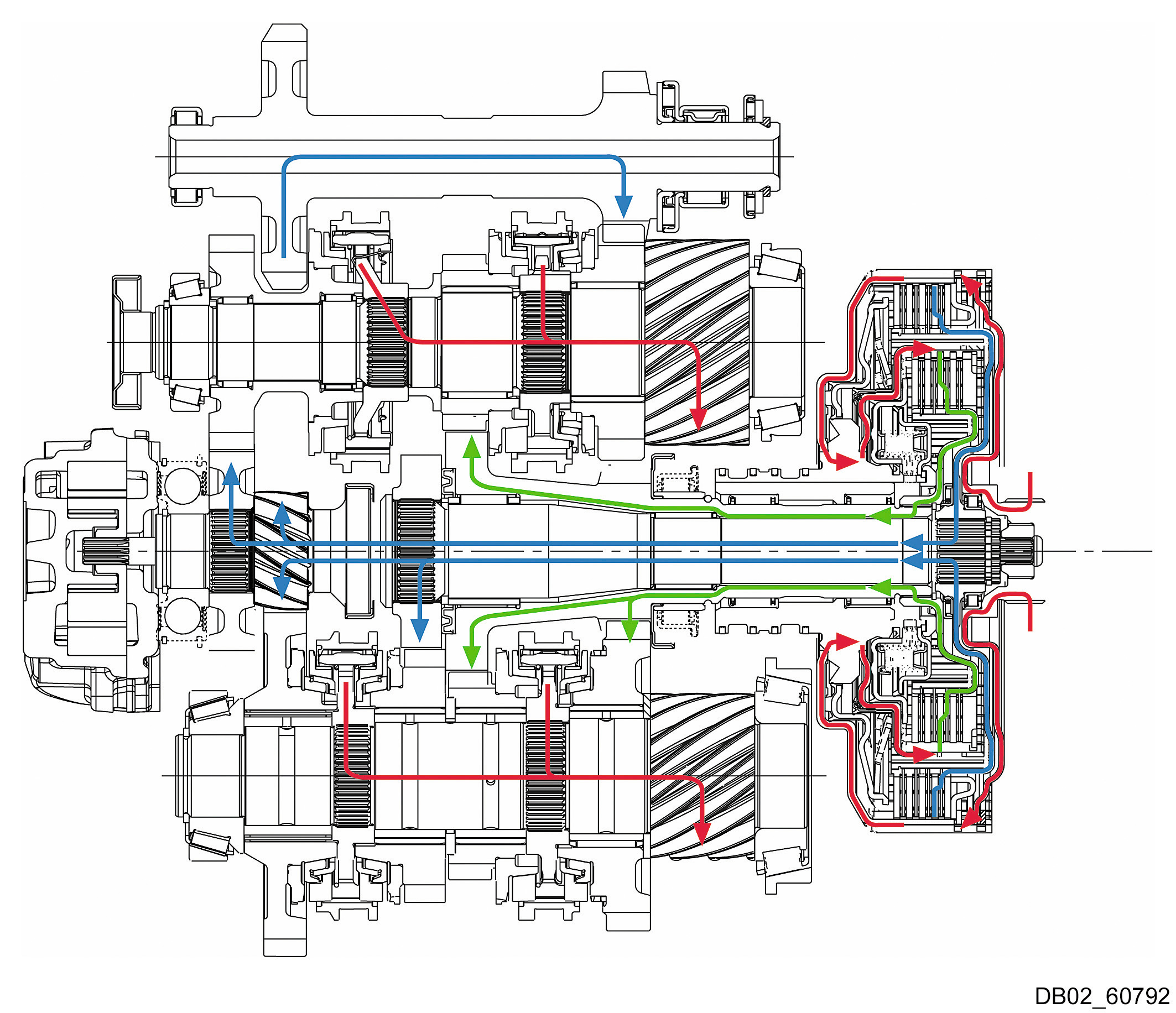 Because of its dual clutch design, some of these exhibit a shudder on take-off from a dead stop. Some models are quite jarring when they shift. An example that is constantly brought up that does both is the PowerShift automatic in the Ford Fiesta. While it does not give an option to shift manually like performance cars, it’s not an automatic transmission in the traditional sense. It is a DCT that has the manual shift option removed.

The reason to use a DCT in place of the automatic is typically two-fold. The first reason is efficiency, it is hard to beat the reduced friction between two gears driven directly by a single clutch (for each gear) over a planetary gear set, pumps, and its clutches. The second is weight, with all the fluid, extra metal, and size of most automatics, the DCT is usually lighter.

The Performance of the Manual 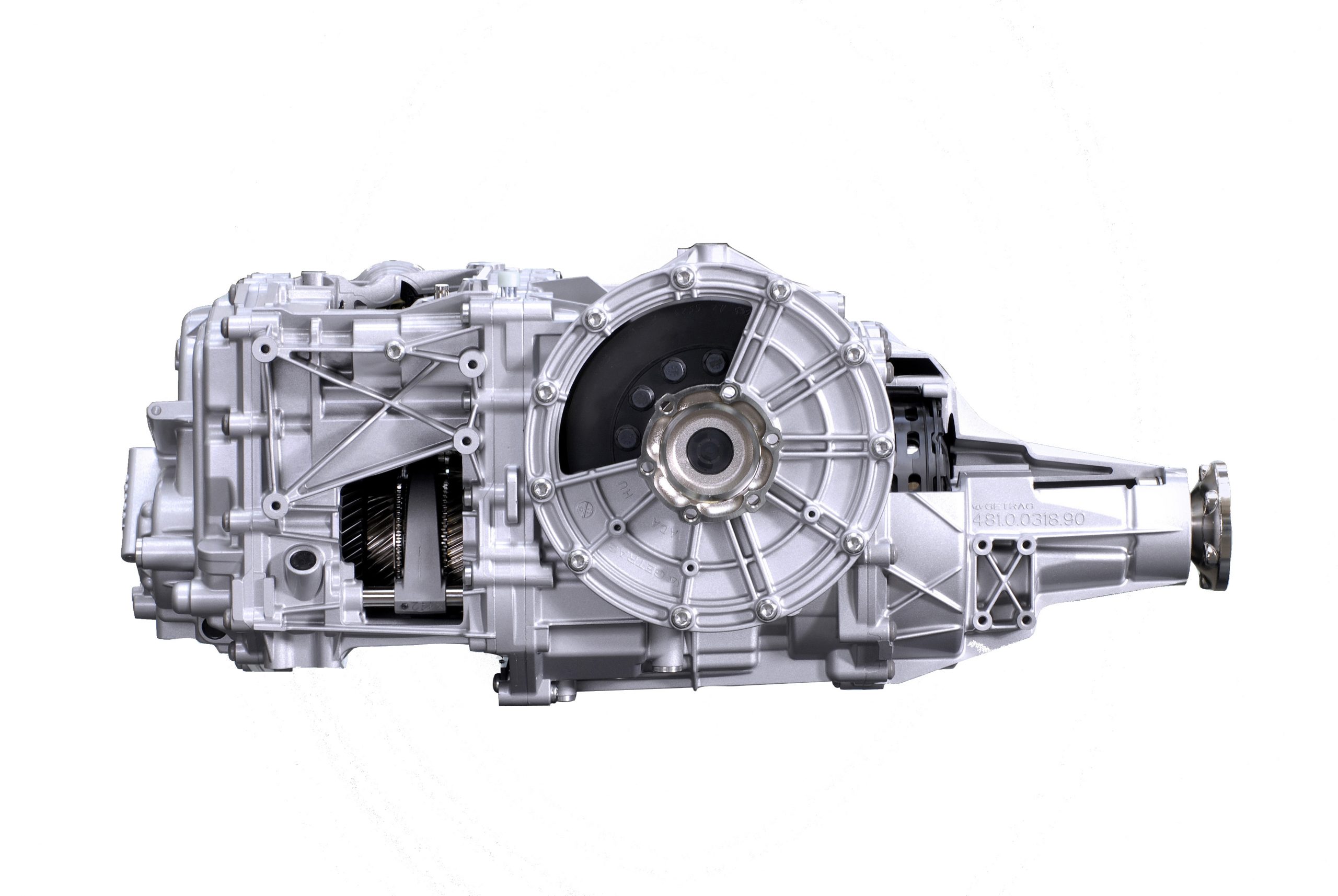 So, with a DCT, you get the best of both worlds for a performance car. The owner can put the car into automatic mode to drive daily and into manual mode when out on track or on a fun drive around their country or mountain road. Legal speeds, of course. For giggles, you also usually get the choice of using the “flappy paddles” behind the steering wheel (the only way in the C8 Corvette) or use the shifter just like you can in a real race car with an inline shift pattern – where pushing it forward shifts down and pulling the stick back shifts up.

Is It the Ultimate Answer?

For 2020 C8 Corvette, 2020 Ford Shelby GT500, and other sports car and hypercar owners, DCT has become the only option. If you look at sales of most of these cars, you will find more people opting for the DCT or an automatic version of these cars. While enthusiasts lament the passing of the traditional H-pattern gearbox, the reality is that most people do not like to row their own gears. Most only own these higher-end cars as a symbol of status over driving enjoyment. Sorry to be the bearer of unwelcome news, but that is reality and manufacturers are only going to make what generates cubic dollars.

Despite that, after a drive in a DCT equipped car, most enthusiasts finally get what all the hype is about. They can still do their own shifting without the need of a clutch pedal or the perfect rev-match. While many of these depressed fanatics will cry that the skill in driving the car is gone, most race cars from Formula One to Rally to GT4 do not have an H-pattern, either.

They are either sequential or paddle shift and will have computer-controlled rev-matching on down shifts, slow down the engine on up shifts, and only use the clutch when leaving from a stop. All these racecar drivers control after shifting are the gas, the brake, and the steering wheel. Just like these cars with DCT. 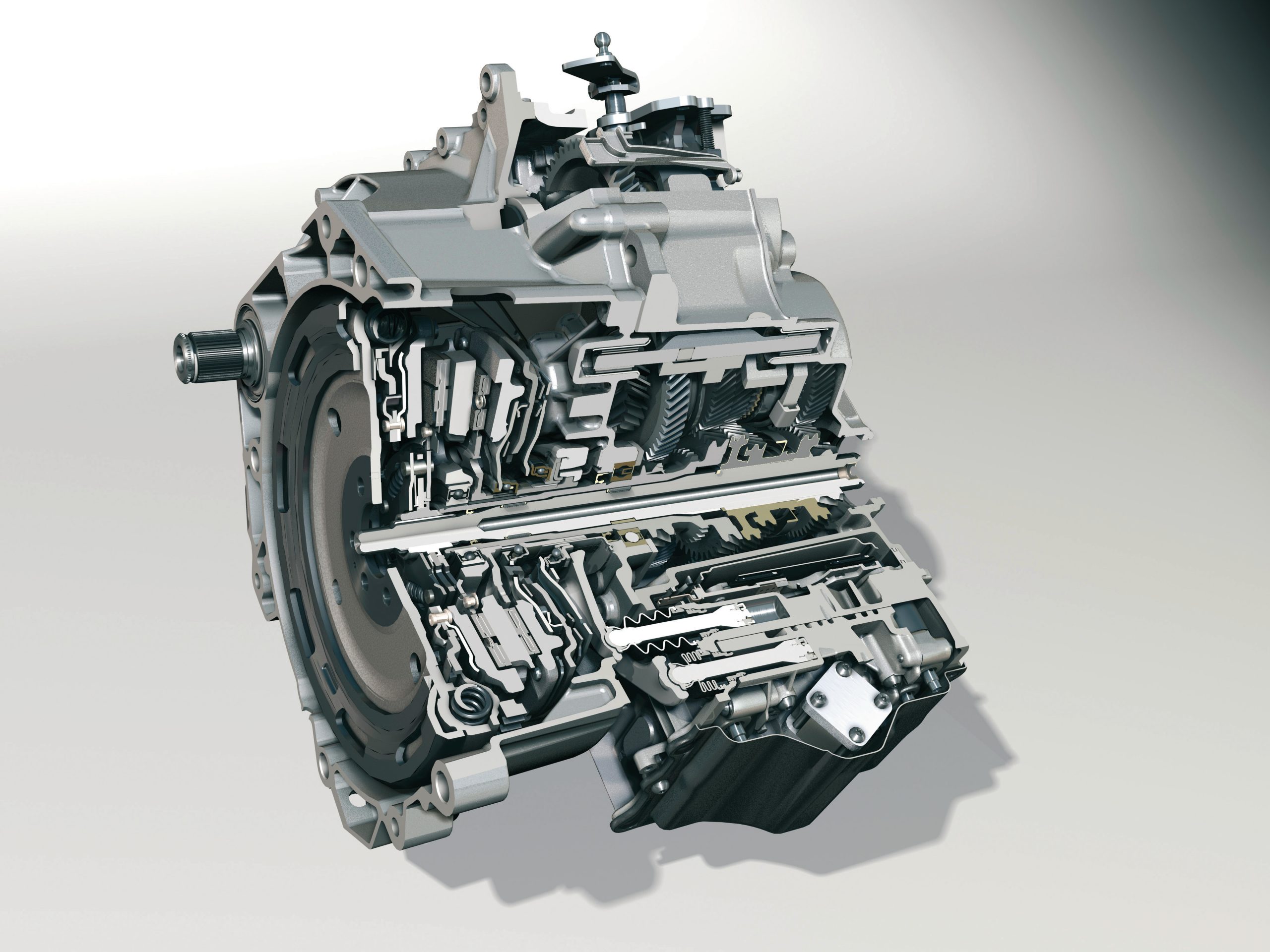 Even after saying all of that, even after the C8 and GT500 gain the DCT, there is another stark reality that might start rearing up in the future. Well, two realities. For cars, including sports cars and hypercars, into the future that continue to use the internal combustion engine (ICE) – the use of DCT may die off very, very soon. As Andy Palmer – CEO of Aston Martin – told Car and Driver, the future is planetary with the traditional automatic.

That, honestly, makes sense: automatics have become stronger, more fuel efficient (due to better gear ratios and more “gears” in a small package with advancements in planetary gear components), and have begun to weigh less than their predecessors while increasing gear counts without increasing their size, as well. Add to that better ways to control gear changes without using bands because it is all clutches and manual shifting is still possible, quicker, and far less complicated to build over the DCT. 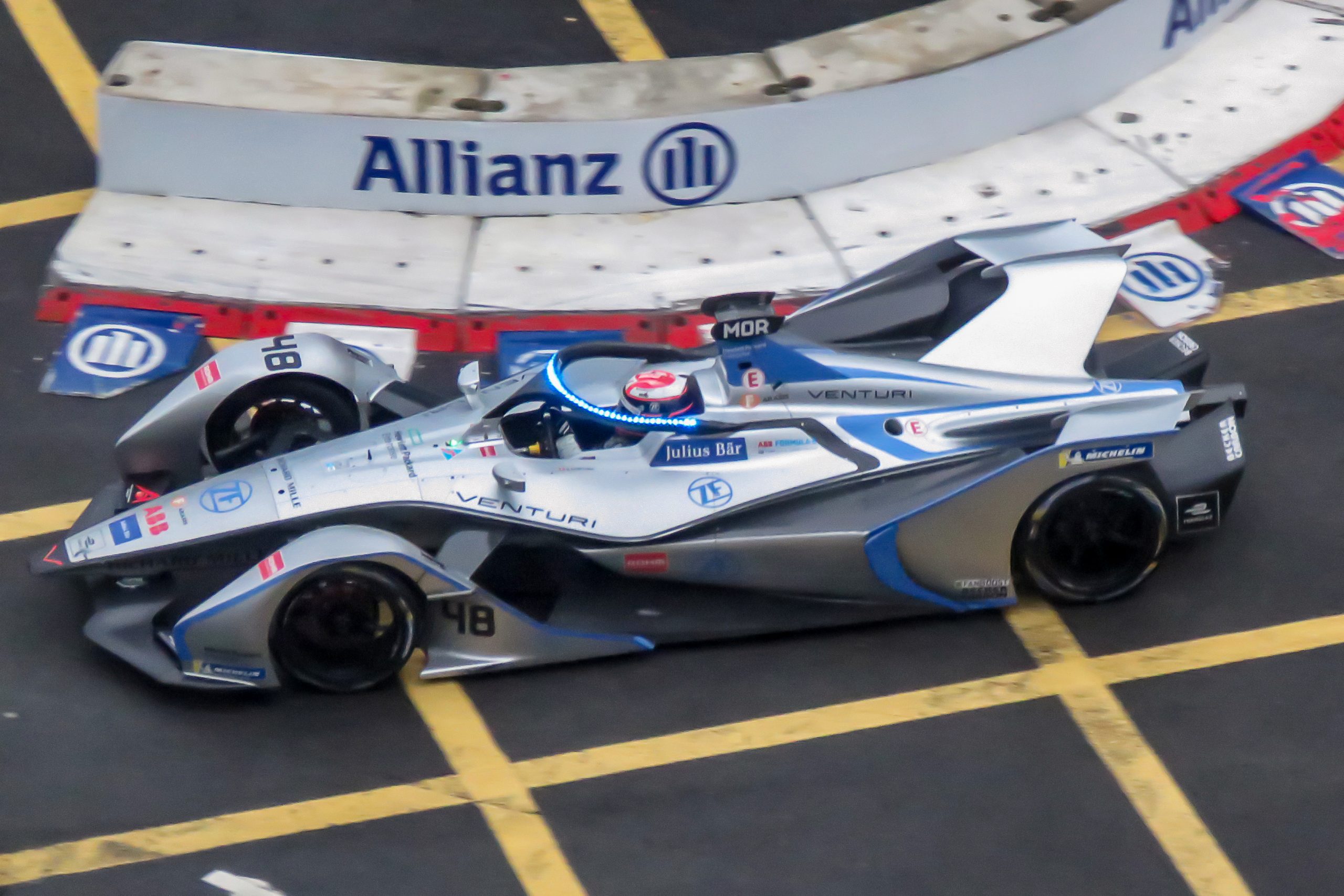 The other reality? More cars are becoming electric and EVs require only a single gear per motor.

Support Carbage On Sponsus and Patreon 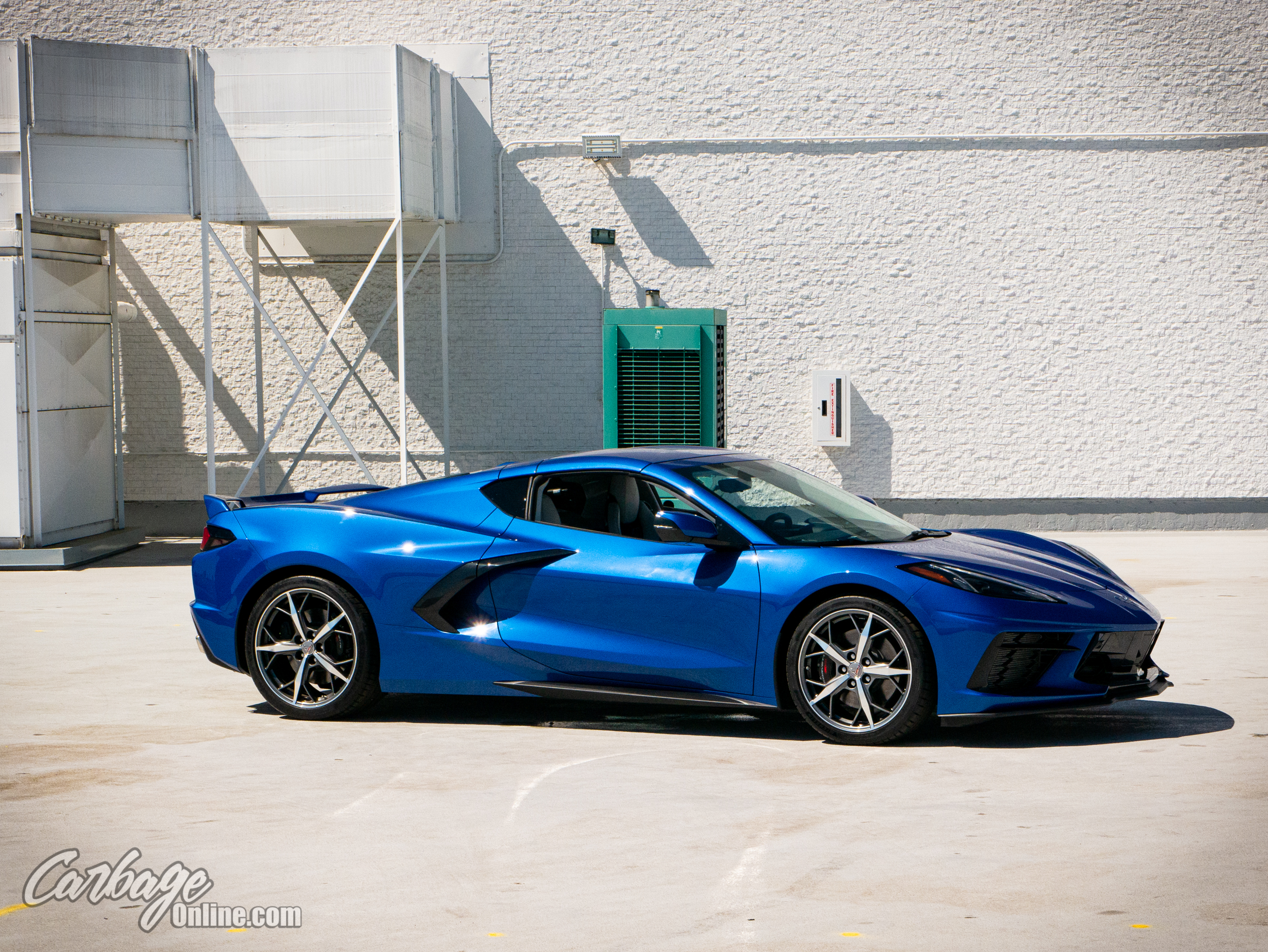 I would like to ask for your support on Sponsus and Patreon. I love doing these videos and it seems you guys always want more. However, doing videos and these articles means I must take time away from doing other income generating work. That is the reason you don’t get to see me do videos and articles on CarbageOnline.com as often as I need to. 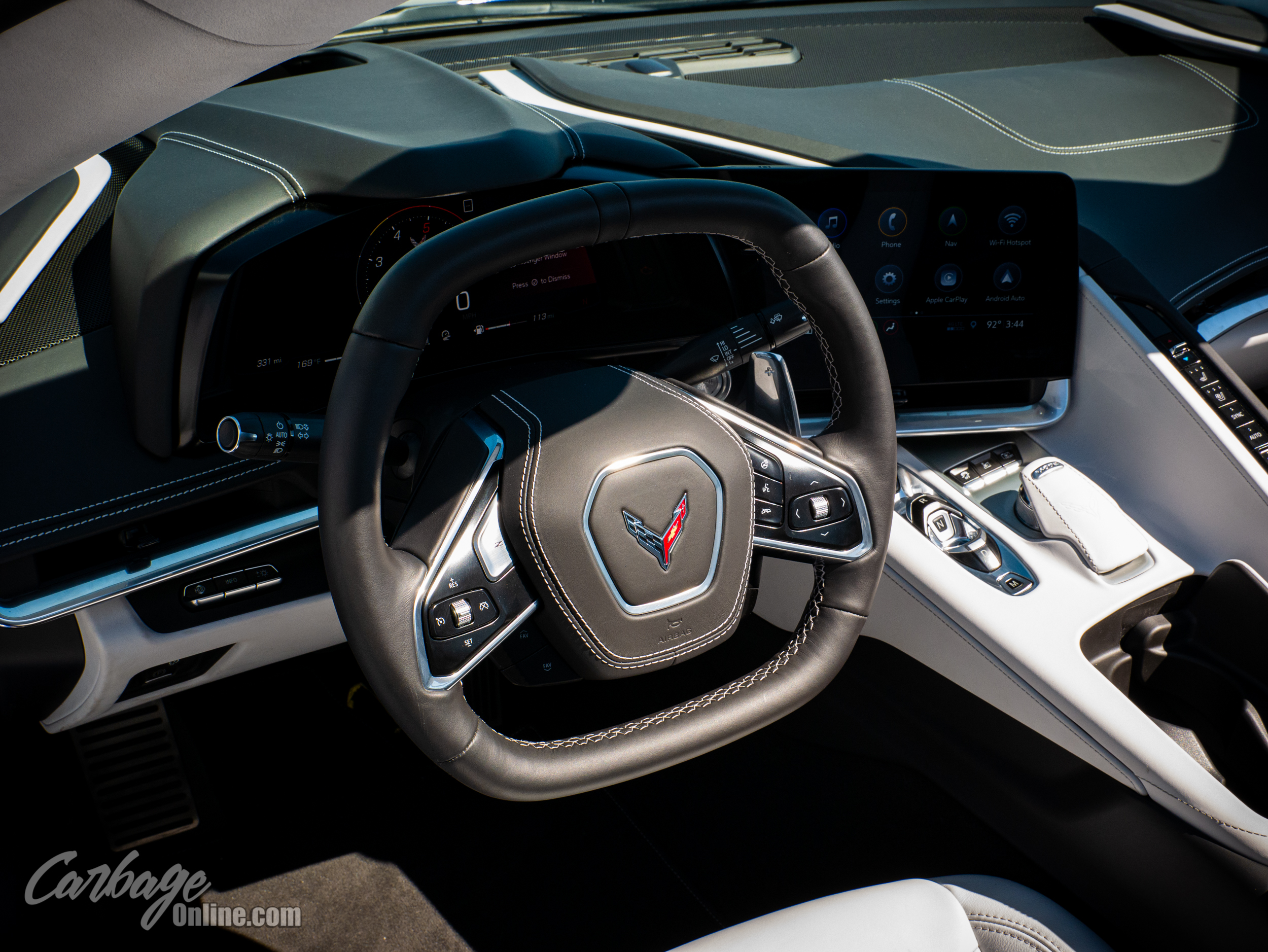 I want to make Carbage my main source of income because, not only do I enjoy it, but I feel I can bring a unique view in the automotive world. You can do just a dollar per month or opt in to one of the rewards I have setup on both platforms. You will also get exclusive content on both sites like galleries, podcasts, and more as I come up with them or from what you guys suggest. Head over, donate, and I’ll can create more content for you here and on CarbageOnline.com.

In fact, this will be the only way for you to see the full gallery of the 2020 C8 Corvette. See the gallery by supporting us today!