Saleen Automotive and Steve Saleen are usually known for their pavement pounders, but the 2021 Ford Bronco gets them into the dirt with a Big Oly theme.

Before Roush really took off for Ford, there was another named closely tied to the Detroit brand that people salivated for: a Saleen version of their Mustang, Explorer, Ranger (as the SporTruck) and even the Focus. On top of that was their halo car, the S7 built from 2000 to 2009. However, nearly all these vehicles were designed for roads that were paved, even the Ranger and Explorer. Saleen Automotive and Steve Saleen were never really associated with off-road builds. Sure, they have the Sportruck XR, but they wanted something more and tied in with Parnelli Jones.

A Saleen-ed 2021 Ford Bronco will certainly do that. What we’re currently looking at are renders, but the homage is unmistakable as this Bronco is another tribute to Parnelli Jones though “Big Oly.”

If you’re unfamiliar with Big Oly, you’ve been under one hell of a rock. It was a Ford Bronco-bodied racer that was driven by Parnelli Jones with Bill Stroppe as his co-driver. It was a radical design and credited as the first ever “trophy truck” as we think about them today. Under that all fiberglass body was a fully custom, tube frame chassis made from 4130 chrome-moly that had no factory Bronco parts on it. Even the Twin-I-Beam suspension was custom built for the Jones/Stroppe effort. 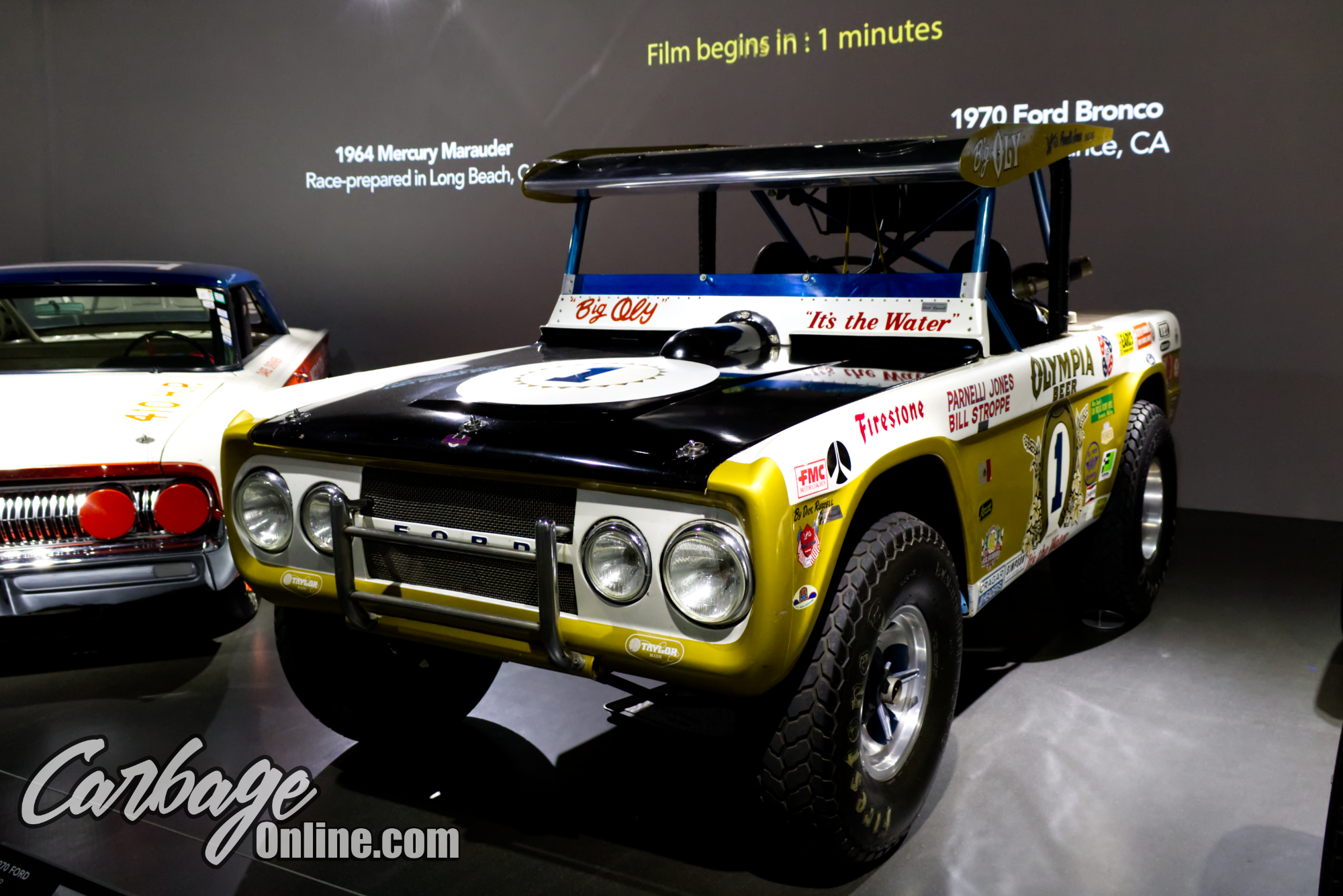 Of course, the star attraction of Big Oly was that incredibly unique aluminum wing set where the roof would be. It was questionable that the wing really helped, but Jones felt like it did as the rear of the short wheelbase racer was rather loose at high speeds. It was also adjustable with a lever in the cab, adding 10-degree increments until it topped out at 40-degrees.

In its four-year run (1970 to 1974), Big Oly, Jones, and Stroppe dominated the Mexican 1000 (Baja 1000), Baja 500, and Mint 400. The streak of supremacy by Jones as a driver was ended only due to him stepping away after a major accident at the 1974 Baja 500. He would continue as a team owner including a Formula One team from 1974 to 1976 as well as owner of a wholesaler business and Firestone tire centers as well as start several wheel brands such as American Racing, U.S. Mags, and others. 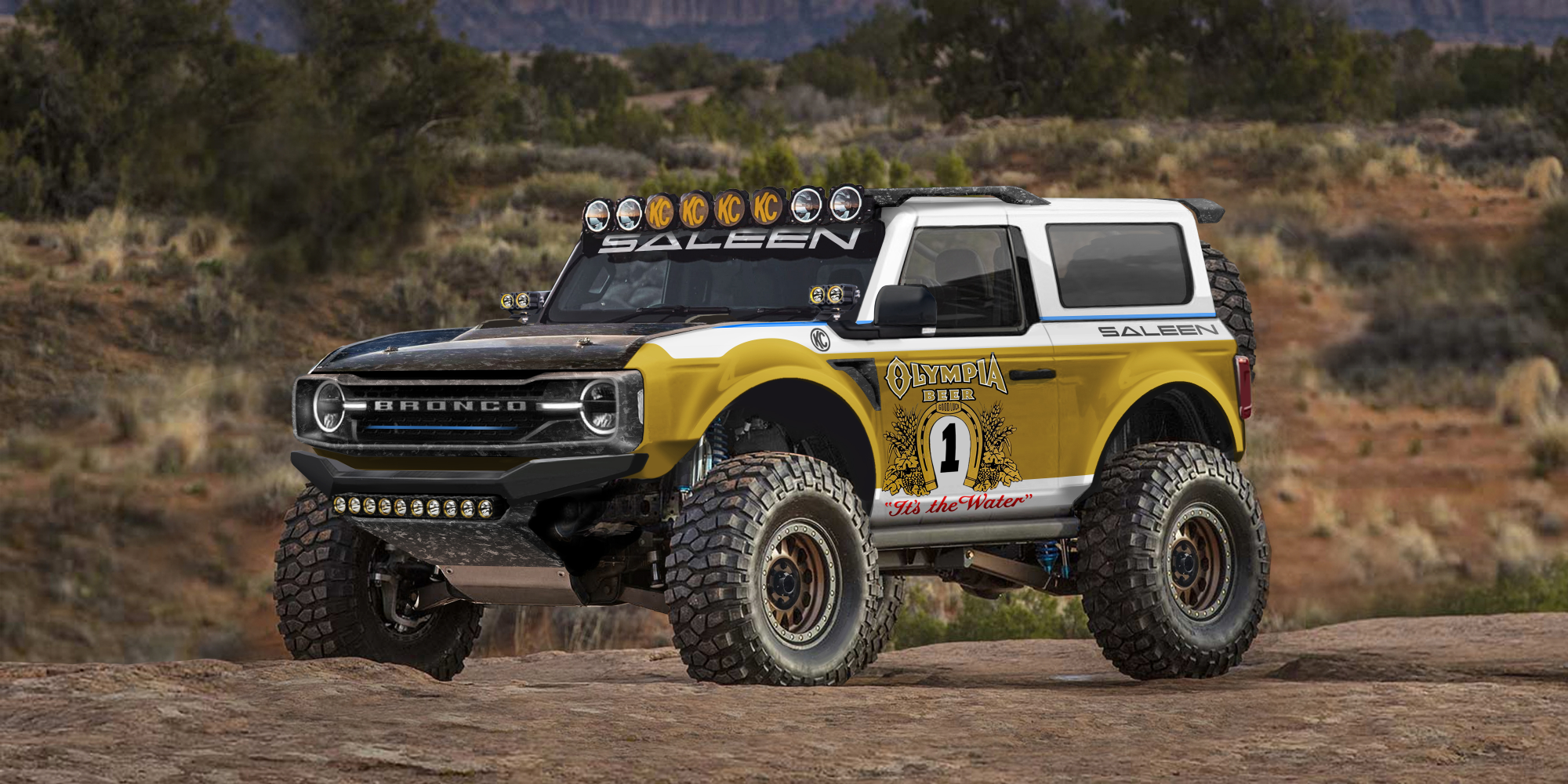 Now that the 2021 Ford Bronco is coming, Steve Saleen and Saleen Automotive thought this would be a great time to remind all of us of Parnelli Jones’ desert roots. To celebrate a new Saleen Bronco, a Big Oly tribute will be built that not only has the original Olympia Beer livery but also many Saleen parts that improve performance off-road beyond what Ford even imagined.

According to the release, “The Saleen Bronco is not only resplendent in a livery reminiscent of the original, but also boasts numerous performance features fans have come to expect from Saleen.” They haven’t provided a detailed list as of yet but promise that more will be revealed soon. Hopefully, it won’t be too long of a wait.

I love doing these articles and it seems you guys always want more. If you want to support the YouTube channel and site, you can do so on Sponsus and Patreon. We also have swag you can buy at Carbage: The Store as well purchasing photos on the Carbage Pixles Shop. I’ve also added Amazon Affiliate linking and ads and both direct up to 10% of sales off the site back to me so long as you buy from them. If you’re thinking of buying off Amazon, be sure to click on those links or ads as any purchase from you through them will help earn a commission for me. If you want more Carbage content, then you need to follow me on Instagram, Facebook, Twitter, and YouTube.